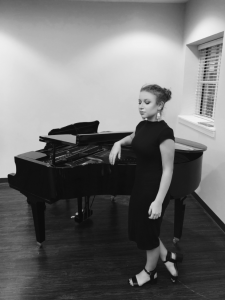 Kate Vohs is an 18 year old actress, as well as singer/songwriter. She was born and raised in Central Pennsylvania before moving to New York City for college. She is currently attending Marymount Manhattan college where she is pursuing a BFA in Musical Theatre as well as a Bachelor’s degree in Speech Pathology and Audiology. She is also a long time student of the Badiene Magaziner Vocal Studio, as well as an alumni of Pennsylvania Regional Ballet. She also attended Juilliard’s Summer Performing Arts Programme as well as NYU Tisch’s Summer Intensive. She is a Mezzo-Soprano with a powerful high belt, as well as a jaw-dropping near four octave range, including C7 whistle notes.

She is a three time recipient of the Broadway World Best Actress In A Musical Award, including their Best Actress Under 18 award for Central Pennsylvania. She also received Stagedoor Manor’s Outstanding Performance by a Supporting Actress award. Kate has performed in many theaters in Central Pennsylvania as well as various locations in New York City, including multiple appearances at Feinstein’s 54 Below, The Green Room 42, Caroline’s On Broadway, Don’t Tell Mama’s, and The Bowery Electric. She was also a singer during the March For Our Lives event in Central Park, where she performed in front of over 3,000 people in addition to the event being televised.

Some of her favorite roles include:

Kate recently performed at Feinsteins/54 Below NYC and “Shine” in the March for Our Lives event in Central Park, NYC! 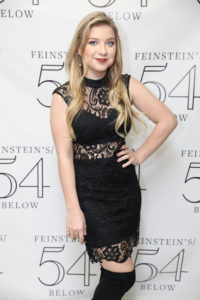 Kate spent part of the summers of 2017, 2018, and 2019 with the Summer Performing Arts With Juilliard, an intensive voice, music, and dance program put on by The Juilliard School.

Kate won the 2017 BroadwayWorld Central PA Awards Best Actress Under 25 for her role as Rafiki in the Lion King Jr, at the Ephrata Performing Arts Center.

Kate played Little Red in Into the Woods at The Belmont Theatre in February 2018!  She won the 2018 BroadwayWorld Central PA Awards Best Actress in a Musical and the Best Actress under 18 for her role as Little Red.

e to her debut appearance on February 14, 2019, at SALT Performing Arts as Fantine in Les Misérables!

Check her out on Broadway World!

Kate Vohs founded “The Kate Vohs Foundation” in March 2019, while only 15 years old, to help others through music and theatre.